Ladies and gentleman, I want to tell you that the life of a startup coaching entrepreneur is not easy; in fact, it’s just plain difficult sometimes. In saying this, I’m not trying to scare you away or stress you out. Instead, I’m here to tell you that this is actually a good thing. 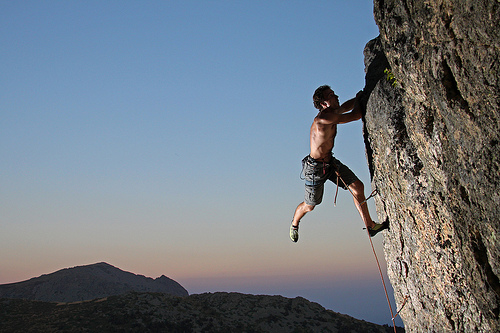 The primary reason why we must endure these struggles (aka “challenges”) is simple: we’re engaging in the business of disruption and challenging the status quo; thus, we should expect challenges to come our way before we experience success. However, the greatest fortunes are won by those who place their chips on the table -and they do so sooner, rather than later.

You’re in the process of racing against time, so in reality, your greatest risk is in hesitation from worrying about the general lack of safety nets below you. It’s called a ‘leap of faith’ for a reason, so it’s important to understand that with risk comes the difficulty of sustaining your vision. Nevertheless, here are 3 reasons why this fact shouldn’t have you running for the hills (ie. your local job fair).

#3 – Hardship Will Forge a Stronger Vision

“There is no success without hardship.” -Sophocles

Why did Sophocles state that existence of success is dependent upon hardship? Well, in order to understand how to achieve success in anything, we need to grasp an idea on what ‘hardship’ is. So, here’s how I’d define hardship: it’s the inherent struggle in obtaining what we want, which is due to the existence of scarcity. So, what is ‘scarcity’? Economically speaking, Investopedia provides a fantastic definition…

“The basic economic problem that arises because people have unlimited wants but resources are limited. Because of scarcity, various economic decisions must be made to allocate resources efficiently.”

Because the principle of scarcity is a global one, it means that in order to overcome it, everyone must compete in order to acquire the resources needed to get what we want. And what we want is our vision.

To give you an interesting metaphor, have you ever seen a blacksmith forge a knife the traditional way? The process goes as follows: the barstock gets heated until it’s bright orange, then it’s hammered, then it’s heated again, then hammered again, and the process repeats over and over …and just as the blade’s reached the intended shape…

Then, the blacksmith dowses it in water. At this point, one of two things will happen.

All great visions must be heated and hammered repeatedly, and then endure the shock of its dowsing. The inadequate visions will shatter and be discarded, but the truly excellent ones -the ones made of the right stuff- will earn the right to survive, becoming successful business achievements. That’s why hardship is the great equalizer of the visions held by startup entrepreneurs.

#2 – Difficulty Will Harden Your Resolve

Bear in mind that failure does not always indicate an inadequate vision. In fact, it could simply be a sign that your vision is enduring a good dowsing at the moment -in which case, this is the time to hold fast and allow yourself to flex. And as Napoleon Hill once said, your next step is experiencing your greatest success. That’s one reason why I believe that there are two kinds of failures for entrepreneurs…

Both are excruciating, but one will shatter a vision, and the other will make it stronger. It’s the difference between an otherwise good business that gets discarded, and one that lives on to become a lucrative enterprise (but with a different name and a different address than the original). Every blade that gets engulfed in fire and baptised by water will endure massive structural changes down to its very molecular makeup.

It’s times like that when a company needs to change its name, business model, or overall branding in order to survive -and though beforehand, that business appeared to be a failure, it actually wasn’t. It simply needed to endure shock, changing it into something of tremendous value that will serve its clients and its owner.

Failure is an opportunity to make a choice, and the results of that choice will either be a destructive shattering, or a constructive hardening …and so, we come to my final point.

#1 – Failure Will Teach You How to Adapt and Overcome

“Bad shit is coming. It always is in a startup. The odds of getting from launch to liquidity without some kind of disaster happening are one in a thousand. So don’t get demoralized.”

Ultimately, we will choose what kind of failure that we’re going to experience; but make no mistake, it’s coming. All startups are destined to deal with some kind of disaster, as Paul Graham so eloquently put it. This is going to appear like a failure, and as I mentioned above, you’ll then have a choice before you. Sure, it sounds like I’m making some rather massive claims, but Success Harbor would agree with me on this one…

“There are over 28 million small businesses in the United States, according to the SBA. It’s an impressive number. The sad reality is that only about 50% of them survive. What’s worse is that only about one-third survive 10 years or more. The life of an entrepreneur is unforgiving. It is a constant challenge. There are many moving parts. Any one of them could put you out of business.”

I believe that Graham’s aforementioned disaster is largely to blame for the 50% failure rate in US-based startups. However, there comes a point when adaptation is the natural result of endurance -and that’s why the 5-year-mark is such a critical one. But why does it require failure, challenge, and five-year-long struggle to earn its liquidity?

Quite frankly, it’s because those disasters and difficulties are there to teach us the strategies, attitudes, and mindsets needed to survive and thrive within the chaos of the marketplace. This also gives us the ability to adapt and overcome, so that it can compete in a world where scarcity exists. But there’s one other thing that I believe failure teaches…

The Hardest Lessons Are the Ones That We Will Never Forget

“Mistakes will not end your business. If you are nimble and willing to listen to constructive criticism you can excel by learning and evolving.”

Failure shows us that it didn’t do us in, and that we lived to tell the tale thereafter. Thus, we lose our fear of it, so that we can embrace its invaluable lessons. It’s the absolute best teacher in the world of startup coaching business, which is far more powerfully constructive than anything a college textbook could possibly divulge.

Now, I’m not saying that college courses and MBAs aren’t incredibly helpful; in fact, they only increase your chances of success. However, why the lessons taught in universities can’t hold a candle to those taught by the excruciating difficulties of launching a startup business is this: people remember knowledge that is linked to their deepest emotions and desires.

The more pain involved, the better you will remember it. The only question is, will you regard that pain as a resource to efficiently allocate (see scarcity definition above), leveraging it as a teachable moment? Or, will you simply let it amount to nothing more than just …pain? Well, here’s a Jim Rohn quote that I’ve recently used, but feel as though it is necessary to use once more.

“We must all suffer from one of two pains: the pain of discipline or the pain of regret. The difference is discipline weighs ounces while regret weighs tons.”

And that, ladies and gentleman, is why you should embrace tough times -and squeeze them for every ounce of wisdom that they’ve got in store for you.