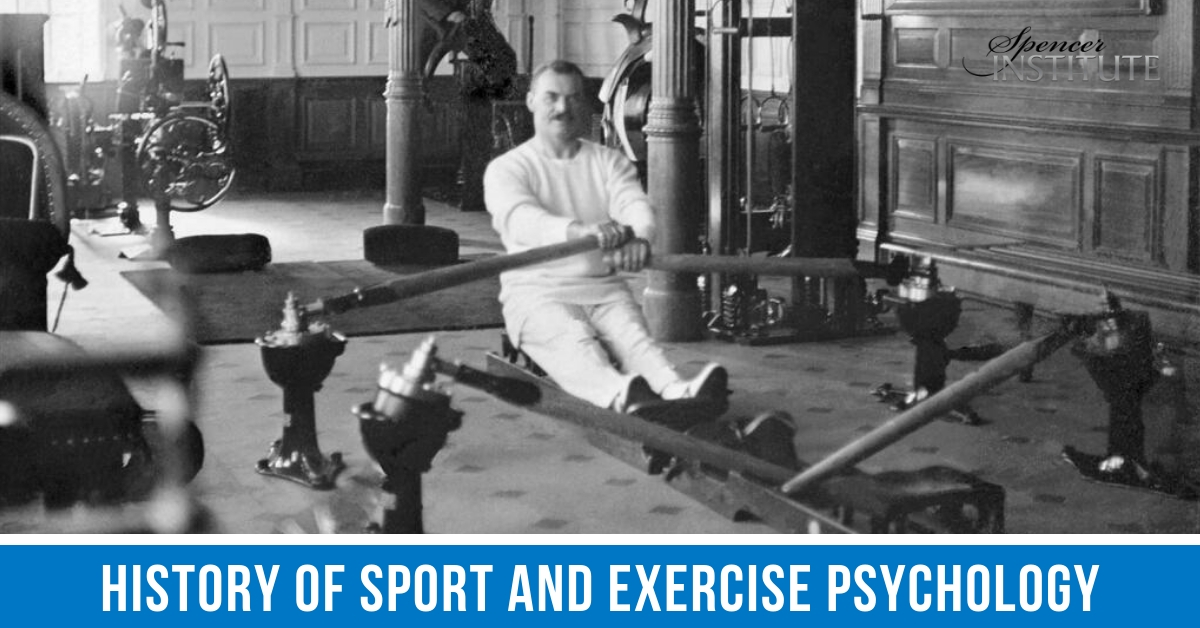 Today, sport and exercise psychology is more popular than ever before. It is a mistake, however, to think that this field has developed only recently. Modern sport psychology dates back to the 1880s, and references to psychology can be traced back to the ancient Olympic Games (Kremer & Moran, 2008).

The history of sport psychology mirrors the history of other fields such as psychology, physical education, and kinesiology. In addition, the field has been influenced by larger sociocultural developments such as the growth of the Olympic movement, women’s liberation efforts, and the popularity of professional sport (Gould & Voelker, 2014).

The history of sport psychology falls into six periods, which are highlighted here along with specific individuals and events from each period.

These various periods have distinct characteristics and yet are interrelated. Together they contributed to the field’s development and growing stature.

In North America, sport psychology began in the 1890s. For example, Norman Triplett, a psychologist from Indiana University and a bicycle racing enthusiast, wanted to understand why cyclists sometimes rode faster when they raced in groups or pairs than when they rode alone (Triplett, 1898). First, he verified that his initial observations were correct by studying cycling racing records. To test his hunch further, he also conducted an experiment in which young children were to reel in fishing line as fast as they could. Triplett found that children reeled in more line when they worked in the presence of another child. This experiment allowed him to make more reliable predictions about when bicycle racers would have better performances.

Another early pioneer was E.W. Scripture, a Yale psychologist who was interested in taking a more scientific data-based approach to the study of psychology, as much of the psychology in these early years was introspective and philosophical. Scripture saw sport as an excellent way to demonstrate the value of this “new” scientific psychology, and with his students, he conducted a number of laboratory studies on reaction and muscle movement times of fencers and runners as well as the transfer of physical training. Scripture also discussed early research examining how sport might develop character in participants. Most interesting was the fact that Scripture worked closely with William Anderson of Yale, one of the first physical educators in America. This demonstrates that those in the fields of physical education and psychology worked together to develop sport psychology.

While Triplett and Scripture were part of the “new psychology” movement that focused on using experimental laboratory methods and measurement to gain knowledge, others were interested in the field from a more philosophical perspective. Most notable was Pierre de Coubertin, the founder of the modern Olympic Games. Coubertin wrote extensively on the psychological aspects of sport and organized two early Olympic Congresses that focused on psychology as it could be related to sport in this time period. In these early years, psychologists, physical educators, and other interested parties were only beginning to explore psychological aspects of sport and motor skill learning. They measured athletes’ reaction times, studied how people learn sport skills, and discussed the role of sport in personality and character development, but they did little to apply these studies. Moreover, people dabbled in sport psychology, but no one specialized in the field.

Period 2: The Development of Laboratories and Psychological Testing (1921–1938)

This time period in the history of sport and exercise psychology has been characterized by the development of sport psychology laboratories in Germany, Japan, Russia, and the United States and increased psychological testing.

Coleman Griffith was the first North American to devote a significant portion of his career to sport psychology, and today he is regarded as the father of American sport psychology. A University of Illinois psychologist who also worked in the department of physical welfare (physical education and athletics), Griffith developed the first laboratory in sport psychology, helped initiate one of the first coaching schools in America, and wrote two classic books, Psychology of Coaching and Psychology of Athletics.  He also conducted a series of studies on the Chicago Cubs baseball team and developed psychological profiles of legendary players such as Dizzy Dean. He corresponded with Notre Dame football coach Knute Rockne about how best to psych teams up and questioned Hall of Famer Red Grange about his thoughts while running the football.

Ahead of his time, Griffith worked in relative isolation, but his high-quality research and deep commitment to improving practices remain an excellent model for sport and exercise psychologists. During this time period, psychologists also began to test athletes, assessing such things as reaction times, concentration, personality, and aggression. For example, baseball immortal Babe Ruth was brought to the Columbia University Psychological Laboratory to be tested (Fuchs, 2009).

Franklin Henry at the University of California, Berkeley, was largely responsible for the field’s scientific development. He devoted his career to the scholarly study of the psychological aspects of sport and motor skill acquisition. Most important, Henry trained many other energetic physical educators who later became university professors and initiated systematic research programs. Some of his students became administrators who reshaped curriculums and developed sport and exercise science or the field of kinesiology as we know it today.

Other investigators from 1939 to 1965, such as Warren Johnson and Arthur Slatter-Hammel, helped lay the groundwork for future study of sport psychology and helped create the academic discipline of exercise and sport science. In addition, under the direction of Alfred Hubbard, the Sport Psychology Laboratory at the University of Illinois was reinstituted and a variety of students conducted studies in the laboratory during this time period. Applied work in sport psychology was still limited. However, by the end of the era, this was beginning to change.

One individual doing applied work during this era was Dorothy Hazeltine Yates, one of the first women in the United States to both practice sport psychology and conduct research. Yates consulted with university boxers, teaching them how to use relaxation and positive affirmations to manage emotions and enhance performance. Yates developed the technique, called the relaxation-set method, during World War II when she consulted with a college boxing team with considerable success. She later taught a psychology course exclusively for athletes and aviators. Like many of today’s sport psychologists, Yates was interested in scientifically determining whether her interventions were effective, and she published an experimental test of her technique with boxers (Yates, 1943). Although she did her work in relative isolation, Yates’ research on practice orientation was especially impressive.

Another individual doing applied work was David Tracy, who was hired to work with the St. Louis Browns, a professional baseball team. His work was widely publicized and is credited with bringing attention to sport psychology.

Helping set the stage for applied work that would begin to emerge in later historical periods was John Lawther, a professor and basketball coach from Pennsylvania State University. Not only did he write one of the first applied books in the area, Psychology of Coaching, but Lawther also emphasized the importance of linking research and practice. He also was influential in graduate education, in supervising doctoral students who went on to become leaders in the field, and in developing sport psychology organizations.

By the mid-1960s, physical education had become an academic discipline (now called kinesiology or exercise and sport science) and sport psychology had become a separate component in this discipline, distinct from motor learning. Motor learning specialists focused on how people acquire motor skills (not necessarily sport skills) and on conditions of practice, feedback, and timing. In contrast, sport psychologists studied how psychological factors—anxiety, self-esteem, and personality—influence sport and motor skill performance and how participation in sport and physical education influences psychological development (e.g., personality, aggression).

Applied sport psychology consultants also began working with athletes and teams. Bruce Ogilvie of San Jose State University was one of the first to do so, and he is often called the father of North American applied sport psychology. John Lawther wrote his book Sport Psychology and continued to influence the field with his research to practice orientation by teaching at universities around the country after his retirement from Pennsylvania State University. Concurrent with the increased interest in the field, the first sport psychology societies were established in North America.

Period 5: Multidisciplinary Science and Practice in Sport and Exercise Psychology (1978–1999)

More and better research was conducted, and this research was met with increased respect and acceptance in related fields such as psychology. Alternative forms of qualitative and interpretive research emerged and became better accepted as the period came to a close. Specialty journals and conferences in the area were developed, and numerous books were published.

Both students and professionals with backgrounds in general psychology entered the field in greater numbers. Training in the field took a more multidisciplinary perspective as students took more counseling- and psychology-related course work. The field wrestled with a variety of professional practice issues such as defining training standards for those in the area, developing ethical standards, establishing licensure, and developing full-time positions for the increasing number of individuals entering the field.

In this period, Dorothy Harris, a professor at Pennsylvania State University, advanced the cause of both women and sport psychology by helping to establish the PSU graduate program in sport psychology. Her accomplishments included being the first American and the first female member of the International Society of Sport Psychology, the first woman to be awarded a Fulbright Fellowship in sport psychology, and the first female president of the North American Society of Sport Psychology and Physical Activity. Harris broke ground for future women to follow at a time when few women were professors in the field.

Today sport and exercise psychology is a vibrant and exciting field with a bright future. Sport Psychology Coaches have endless opportunities to work with athletes ranging from beginning to professional and all points in between. Some coaches build businesses working with youth athletes. Others specialize in sports such as triathlon. Other coaches work with teams in the college and pro ranks. There are no limits to what is possible for your career.

How You Can Help