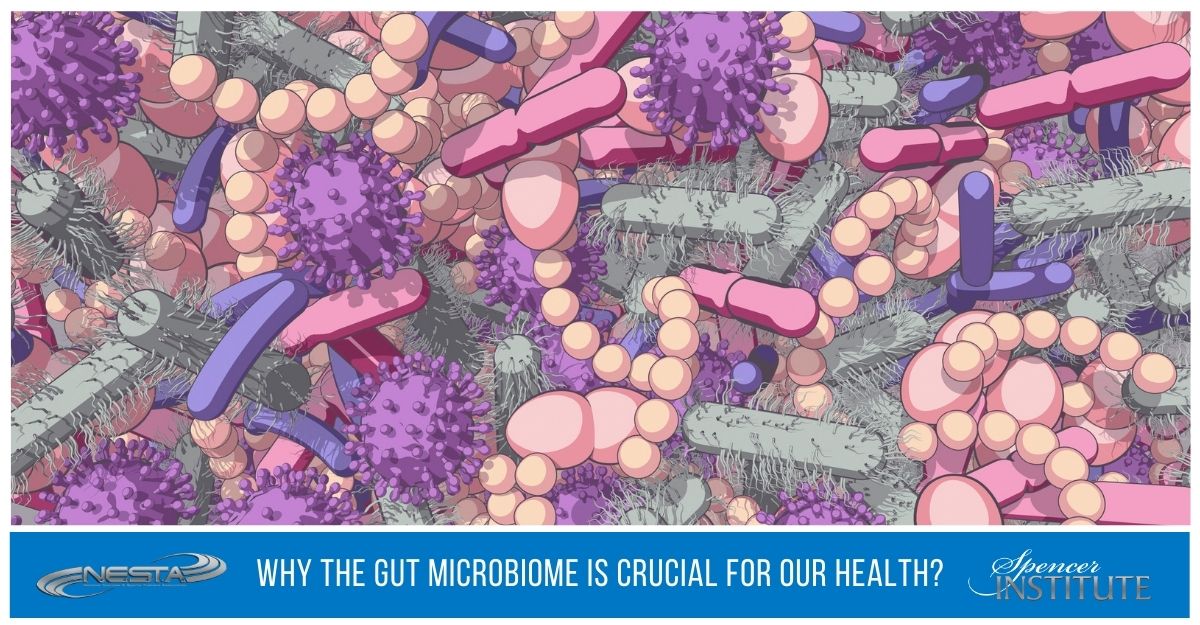 Why the Gut Microbiome Is Crucial for Our Health?

The human body is full of bacteria, viruses, and fungi. They are collectively known as the microbiome, and their totals are impressive, numbering in the trillions.

While some bacteria are associated with disease, others are extremely important for your immune system, heart, weight, and many other aspects of health.

What is the Gut Microbiome?

Bacteria, viruses, fungi, and other microscopic living things are referred to as microorganisms, or microbes, for short.

Trillions of these microbes exist mainly inside your intestines, with some also known to be on the skin. It is here that most of the microbes in the intestines are found, in a “pouch” at the junction of the small and large intestine called the cecum. The microbes found in the cecum are generally referred to as the gut microbiome. For various reasons, bacteria are widely studied even though many different types of microbes exist inside us.

The human body also relies on mucosal tissues to store microbes in some environments.

Some of the strongest studies have looked to understand the interface for host-microbiota interactions and the intestinal mucosa. This highly specialized feature of the intestinal immune system can establish immune tolerance towards an enormous and constantly changing wealth of harmless microorganisms, while concomitantly preserving immune responses against pathogenic infection or commensal intrusion into our sterile bodies. In a healthy state, the host’s immune response to the intestinal microbiota is strictly compartmentalized to the mucosal surface. A single layer of epithelium separates the intestinal lumen from the underlying tissues. Many mechanisms are employed to achieve microbiota compartmentalization. A dense mucus layer separates the intestinal epithelium from resident microbes. The mucus barrier is organized around the hyperglycosylated mucin (MUC2).

However, MUC2 not only offers protection by static shielding but also constrains the immune properties of intestinal antigens by imprinting enteric dendritic cells (DCs) towards an anti-inflammatory state.

Mucus is somewhat colonized by a vast number of microorganisms that we also include in the use of the term microbiome. The collective genomes of bacteria and other microorganisms in this ecosystem have been increasingly investigated during the past two decades, due to the rapid development of culture-independent genomics, techniques, and the convenience of at-home testing. Recent advances in microbiome research revealed that the gut microbiome is not just a passive bystander, but actively impacts multiple host functions, including circadian rhythmicity, nutritional responses, metabolism, and immunity.

We also need to realize the impact and function of the gut-brain axis (GBA). It consists of bidirectional communication between the central and the enteric nervous system, linking emotional and cognitive centers of the brain with peripheral intestinal functions. Recent advances in research have described the importance of gut microbiota in influencing these interactions. This interaction between microbiota and GBA appears to be bidirectional, namely through signaling from gut-microbiota to brain and from brain to gut-microbiota using neural, endocrine, immune, and humoral links. Some practitioners also believe that a malfunctioning microbiome in the gut can send signals akin to cravings using the GBA. This is a powerful connection and again, is another way our brain protects how our gut tube interacts with the environment we are in.

In humans, the immune system encompasses a complex network of innate and adaptive components in all tissues, playing a vital role in host defense against various potentially harmful external agents and endogenous perturbations of homeostasis. From an ecological perspective, mammals and their commensal microorganisms co-evolved toward mutualism and hemostasis. Such an intimate relationship requires a healthy gut microbiome. It also requires the proper function of the host and their ability to maintain the appropriate immune tolerance/response.

Still, there are more bacterial cells in our bodies than human cells (there are about 40 trillion bacterial cells vs 30 trillion human cells in the body. That means we are more bacteria than anything else. There are believed to be up to 1,000 species of bacteria in the human gut microbiome, and each of them plays a different role within the body. Most of them are extremely important for overall health and yet others are known to cause some diseases.

Altogether, these microbes may weigh as much as 2–5 pounds (1–2 kg), which is roughly the weight of your brain. Together, they function as an extra organ in your body and play a huge role in our general health.

Such an intimate relationship requires the proper functioning of host immunity to prevent commensals from over-exploitation of host resources while maintaining immune tolerance to innocuous stimuli. However, perturbation of the gut microbiome by environmental incursions (such as antibiotic use, diet, or changes in geography), impairment of host-microbiome interfaces, or alterations of the immune system can result in systemic dissemination of commensal microorganism, susceptibility to pathogenic invasion, and aberrant immune responses. In addition to regulation of infection and communal spread, microbiome-immune interactions are implicated in a variety of ‘non-communicable gastrointestinal diseases including inflammatory bowel disease (IBD) and celiac diseases,as well as extra-intestinal disorders ranging from rheumatic arthritis, metabolic syndrome, neurodegenerative disorder to malignancy. The interactions between the gut microbiota and host immunity are complex, dynamic and must take into account the context in which the GM is being studied.

Just as it has been among medical and nutrition professionals, interest in the microbiome is now at an all-time high, with the microbiome connected to an increasing range of diseases of interest to gastroenterologists, hepatologists, oncologists, and … even the lay consumer. The general population is learning how important a healthy GM is for overall health and wellness.

For example, obesity, inflammatory bowel disease, alcoholic and nonalcoholic fatty liver disease, and hepatocellular carcinoma all have been linked to the microbiome in human beings, and changes in the microbiome have been shown to induce or modify these diseases in animal models. The human gut is home to a variety of microbes, including bacteria, archaea (single-celled organisms without nuclei that are related more closely to eukaryotes than to bacteria), fungi (mostly yeasts), microbial eukaryotes (usually Blastocystisin the United States, but a variety of pathogenic and nonpathogenic taxa in developing countries), and viruses/phages. This collection of microbes is called the microbiota; their genes are called the microbiome. However, the term microbiome has come into popular use to refer to the microbes themselves.

Whether the microbiome includes the virome (the repertoire of viral genes) is open to debate. Because of the technical ease and widespread utility of approaches that just read the bacteria (see later), many people assume that the microbiome refers only to the bacteria, but this is not correct. Rather, if a difference is shown in the bacterial compartment of the microbiome between cases and controls, it is necessarily true that the microbiome is different; however, if no difference in the bacteria is found, there still might be a difference in other kinds of microbes (eg, yeast or viruses). Until recently, a
frequently repeated slogan was that the human microbiome contained 10 times as many cells as the human body. This figure was based on a rough calculation 40 years ago, and the correct claim was that the true figure was somewhere between 1:10 and 10:1, but could be as much as 10:1. Since then, errors on the estimates of the number of human cells and microbial cells have narrowed considerably, with the true figure being much closer to 1:1, with the balance slightly in favor of the microbes. However, since it is part of our triad model of coach training, we will explore ways to increase good bacteria in the gut.

In a general sense, we will assess the current intake of fiber and recommend intake based on current values in client food logs. If, in fact, fiber is an ongoing concern or if it is a specific goal, we look at CHO intake and examine the quality of the intake for each food log entry. If food logs are not being generated on a consistent basis, what might this indicate?

Probiotic foods are those with live bacteria or yeasts found in fermented foods that, when consumed, take up residence in the gut and improve health. Healthy sources include sauerkraut, miso, tempeh, kimchi, and water kefir.

By avoiding red meat, high-fat dairy products, and fried foods, clients should receive coach guidance to consider plant-based alternatives. The intake of these foods reduces the growth of healthy bacteria and enhances the growth of “bad”.

Better still if we can wean our client from excessive fried foods, especially important if your client is diabetic (or prediabetes). Another pro in the list of plant-based diets: most plant foods are naturally low in fat.

In general, the CIHC is called upon to lead clients toward healthy outcomes. There are no alternative ways to be healthy. The tried and true techniques of proper nutrition, exercise, getting enough sleep, and managing stress can all have a positive impact on your gut microbes.

To support coaching that targets optimal health, the Certified Integrative Health Coach course will train you to focus on three vital areas of client need:

An experienced coach will work different strategies with their clients, usually based on a collection of assessments and goals.

Integrating these elements brings our clients odds at reaching their very specific and measurable goals.  We can also address gut microbiome concerns, we can even do metabolic coaching with our client in our Triad model.  More options, better results.

How do you learn all this so you can become world-class coaching professional?

It’s all part of your curriculum in the Spencer Institute Integrative Health Coach Certification.