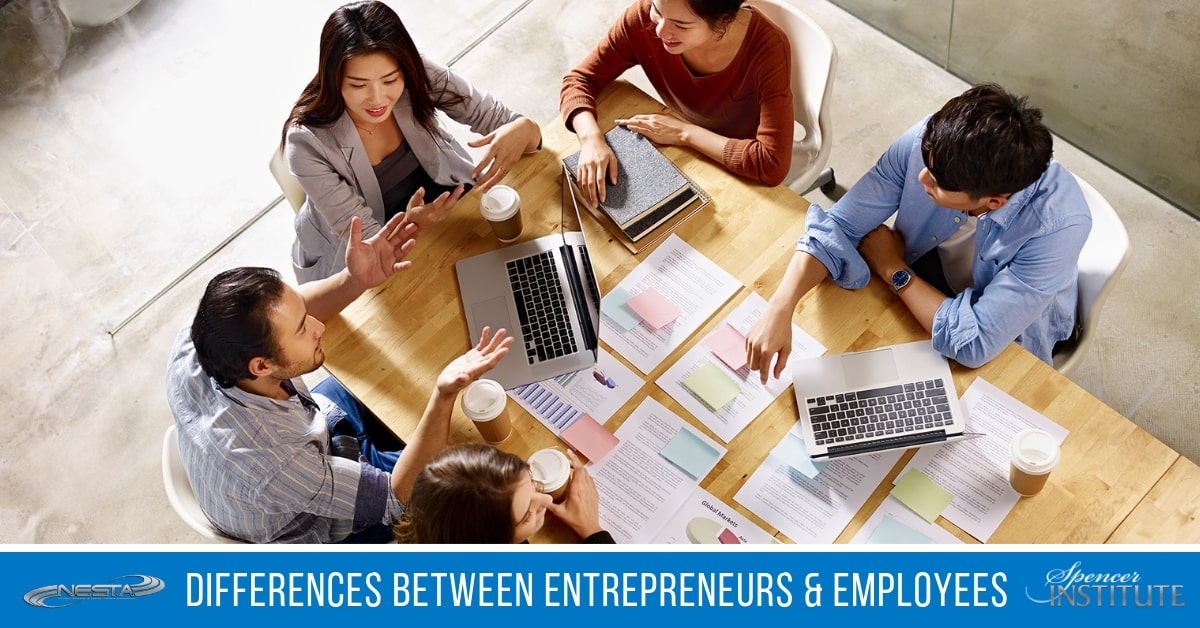 What does it take to run a professional coaching business? It takes a person with an idea (entrepreneur) and people who implement the idea (employees). Entrepreneurs and employees are like two other sides of the table who put in the effort to make any idea work.

But how you define an entrepreneur?

Being an entrepreneur doesn’t necessarily mean that you need to own a business. The term “entrepreneur” refers to a mindset, an attitude.

Honestly speaking, entrepreneurs are people who are inclined to take on financial and personal risk to pursue a dream. They care less of the plausible outcome of failure in return for the opportunity to succeed or learn something new.

On the other hand, “employee” refers to an individual who gets paid in return for their services. Their job is to get the work done perfectly on time; they are specialist at what they do. Their jobs don’t require them to take any major decisions or take ownership of the outcome of the job done.

Entrepreneurs are the doers, as soon as an idea strikes them hard, they just take a plunge without thinking twice or even fearing the consequences. They are go-getters. They either achieve something big or they learn a lesson. Either way, it’s a win-win situation for them. On the other hand, a person with an employee’s mindset ponders over an idea for so long, that they almost lose interest in that idea.

Employees strive hard to overcome their weaknesses as they are taught weaknesses are bad, and they should overcome them. This is the mindset that doesn’t let an employee grow. They always look for an easy way out. The fear of failure doesn’t let them experiment.

On the other hand, entrepreneurs are always ready to experiment and open to endeavors, and new adventures, as failure is the last thing on their mind. Entrepreneurs view focusing on weaknesses as fruitless; they would rather draw on their strengths.

The major difference between employees and entrepreneurs is that entrepreneurs focus on creating opportunities, they often say no to everything just to focus more on what matters to them.

Whereas employees are opportunist, they believe in grabbing every given opportunity, rather than creating one. They say yes to almost everything because they fear saying no to an opportunity will make them miss on something big.

Entrepreneurs value their time more than anything in the world and focus on things that only they can do. They try to outsource most of the work and are always looking for ways to get things off the plate to focus their attention on things that are more important to them.

Employees are the exact opposite. They see outsourcing work as a sign of weakness and struggle to juggle it all on their own, soon giving up the idea or totally failing at everything.

There goes their favorite mantra, “If you want it done right, do it yourself.”

Contrary to common belief, there’s no such thing as multitasking. There are relevant Studies that show that our minds are not capable to focus effectively on more than one idea at a time.

Entrepreneurs see multitasking as doing nothing well, so they rather “mono-task”.

On the other hand, employees are trained to work like robots, they are taught to multitask in order to be a skilled employee and when they are not able to multitask, they end up being frustrated and consider it as their weakness.

Entrepreneurs Thrive in Challenges and Risks

Entrepreneurs thrive on challenges and risks.

If you ask any employee why they would prefer doing a job rather than a business, they’ll say they need the security of a day job that pays them a fixed amount of money every month. Not having the assurance of a pension, fixed paycheck or health insurance is too risky for them to consider leaving their full-time jobs and start a business which involves a risk factor.

But entrepreneurs thrive on risk. They believe without risk, there’s no gain, and instead of scaring, this knowledge actually excites them. They look forward to challenges and welcome them with open arms and consider them necessary for their growth.

As Peter Drucker rightly said, “Whenever you see a successful business, someone once made a courageous decision.”

Balanced work and life? This is every employee’s most secret dream, the most sought-after treasure which every other employee is after.

But it only takes a true entrepreneur to know that balance is just an illusion. Instead of trying to be a master of all trades and expert at none, they focus their energy on excelling in one area of their lives, as they know if they won’t, other areas will suffer too.

Therefore, instead of striving for an unachievable balance, they identify that one thing that will always have to take priority over the others.

There’s a term often used called, the survival of the fittest, and especially when it comes to the corporate jungle.

Entrepreneurs hire smart people. They know that without a smart person they can’t create a great team, their business will grow with smart people, so they are always ready to hire them up.

At this point one thing that’s worth being noted is you don’t have to own a business or be a CEO of a startup, having the entrepreneurial mindset is crucial to attracting success.

Employees Work Towards a Promotion. Entrepreneurs Hustle for the Promotion of their Business.

People with an ‘Employee mindset’ have only one aim in life and that’s to get a promotion at work. They work hard every day and night making someone else’s idea or concept into a SUCCESS. Their aim in life is limited, their dreams are limited. Whereas entrepreneurs work hard with the intent to learn new ideas, polishing their skills, using their learned ideas for the promotion of their own business. They are always busy finding various ways to boost up their business dreams.

Employees work their ass off to uplift someone else’s business dream. All the hard work is done to come into Boss’ good books. By doing good work, they do receive a pat on their backs and even though the boss is happy, more and more files tend to pile up on their desks.

Entrepreneurs work smart, not hard, they know where and what to spend their energy on, they know the right direction. They soon learn the art of time management and categorize their work under the categories of Important, Most important and Urgent.

In order to achieve success in life, you need to have the courage to accept your mistakes.  Entrepreneurs realize that there is no use in playing the blame game, it’s better to accept one’s shortcomings and work on overcoming them.  Whereas people with employees mindset’ have the habit of always complaining, blaming others for their faults, justifying their wrong actions and getting defensive when someone points out their mistakes.

People with employees’ mindset never take ownership for their wrong actions, whereas people with an entrepreneur mindset know they are responsible for all their decisions in life. Instead of getting defensive they own their mistakes and try to learn from them.

Failure is a part of life. You can’t always win; sometimes you have to face failures in life. If you are not ready to accept failure, this attitude will never let you succeed and you will always be stuck in life. Individuals with an employees mindset lose their confidence in the struggling period. They look at failure as a dead tunnel. People with Entrepreneur’s mindset find an opportunity in every failure. They don’t get disheartened or lose their confidence. They quickly recover and grow stronger with every failure life hauls at them.

So, how would you define yourself…are you an Employee or an Entrepreneur?

The Online Coaching Certification is your step-by-step blueprint to build a highly profitable online coaching business.

If you are passionate about helping people and living a fulfilling life, we can help you achieve your dreams right now. The Life Strategies Coaching Certification Course combines the latest advancements in human potential and neuroscience with proven methods of success used by the world’s most productive people.

PS: Click here to see many helpful business and career resources for coaches and trainers